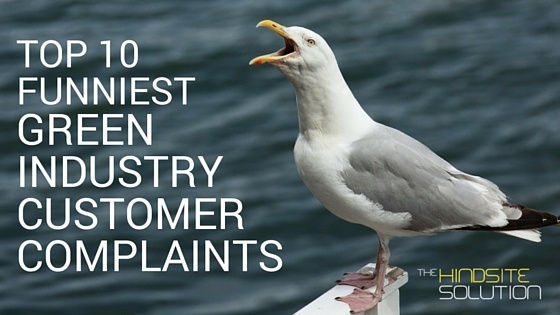 LawnSite.com is a great resource for green industry professionals to connect and to share business knowledge. If you need to learn more about how to do a certain job, or learn how to winterize your gear or pretty much anything else, there are a ton of threads you can turn to.

This is not an example of any of those. The following has nothing to do with learning and improving your green industry business. But, they are pretty dang funny. I went through the LawnSite.com thread called Best Customer Complaints! and came up with a top ten list of the funniest complaints, enjoy!

“I had a customer call me up and say my lawn turned all brown after you treated it! I told her I would be right out in the morning. Just treated her lawn it was beautiful, I was wondering what could have gone wrong.

Pulled up the next morning, lawn is looking real good, iron already kicking in. She comes running out and yells, see? It's all brown! I say I'm sorry I don't see it, she drops down, parts the grass, points at the dirt and says, see? I said that's the ground, well wasn't that supposed to turn green also?”

“I had a customer’s neighbor come out the other day and ask if I was going to power wash their house because I blew dirt all over it after I was done mowing.”

“A few years ago I had one customer come out and stop me while mowing accusing me of having dull blades and leaving a s***** cut because my mower was leaving these stripes in their yard and it looked ‘just like a baseball field’ (since a baseball field is the epitome of poor lawn maintenance.....). They went on to ask if there was a way I could remove the stripes from the yard! Trying to accommodate I went over the stripes in the opposite direction and promptly quit.”

“Customer: When are you coming back to finish the job?

Customer: Well I thought it would have looked a lot better than it does.

Me: You requested to have your flower bed raked out. Was there something we may have missed?

Customer: No that was exactly what I wanted...”

“I was repairing a sprinkler system for a guy, nice house, in a $400,000 neighborhood. I gave him the bill, he looked at it and complained, ‘that's twice what I make an hour and I am a lawyer’. I looked him straight in the eye and said ‘I used to be a lawyer, now I do this’.”

“I took a guy to court for non-payment a few years ago, his exact quote to the judge was that even though he signed the contract, I made too much per hour. He then told the judge that he feels that about a third would be acceptable as that would put me in line with what he makes per hour.”

“This lady dropped me because I made her lawn look like she was rich and she did not want to ‘get robbed.’”

“I had a woman come up to me while we were mowing an HOA and told me, ‘You're mowing too much, you're going to kill the grass. Everybody knows that you don't mow as much when it's a drought.’
So I say, ‘Well, we have irrigation here, so if I don't mow every week during the summer, the grass will be 8 inches tall and it'll get damaged if I remove too much of the grass blade in one mowing every two weeks.'
Looks dumbfounded...
Then she tells me that we're cleaning too many leaves out of the gulley.
‘It's too clean, it doesn't look natural.’”

“Hey Will, I’m not sure who the [expletive] cut the privet earlier today but it looks like the [expletive] Pacific Ocean. I mean there are [expletive] waves all over this hedge. I would like it fixed by the end of today."

And a drumroll please for your Funniest Customer Complaint from LawnSite.com...........

“Told a lady the other day she had to have the kids go inside when I was mowing for safety reasons. She said she liked to have them watch me work so they could see why they needed to work hard at school and have goals when they got older so they wouldn't have to do this type of stuff."