4 Field Service Prospect Personalities and How to Sell Them 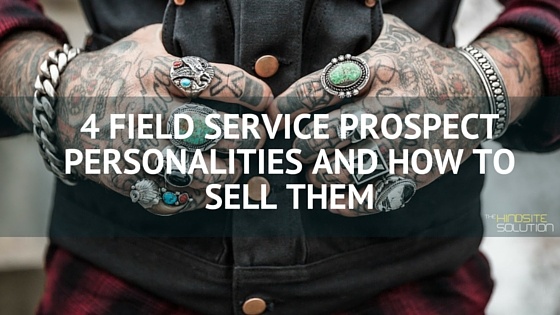 Has a prospect ever shut you down so hard you didn’t even have time to think about what went wrong? Or have you ever felt like you wasted an hour talking to a prospect who just wouldn’t stop asking questions? And on the other side of that coin, have you made sales that were so easy that you wish you could replicate them over and over again.

Selling is tough. Asking someone to give you their money is uncomfortable. If you’ve ever been in a position where you’ve had to cold call, I don’t need to tell you this!

We’ve written a few blog posts on the topic of sales and what it really comes down to is building a relationship with people. But the way that we develop relationships with people shouldn’t be a one-size-fits-all approach since there are different personalities in play.

Lets look at the four basic personalities that are identified by the DiSC Analysis of Personalities. The DiSC analysis is a common personality assessment that groups people into one of four categories: dominant, influence, steady and conscientious. You might have taken a version of this test at some point in time - it's common among employers and schools. And if you’re like me, you were surprised by the results. I thought there is no way I’m an influencer… after a bit of reflection, I do know that I tend to get distracted pretty easily!

Here are the four personality types that you will encounter when pitching your field service business for jobs and how you can effectively sell to these personalities.

Dominant personalities are driven and determined people. They might rush you on the phone or in person. If you’re explaining something to them, they just want you to get to the point. You might see these types of folks as brash or over the top depending on your own personality. Typically dominant people sell well to other dominant people.

Be professional and to the point. Dominant people don’t want their time to be taken up by small talk. Explain how the service you’re providing is going to save them time and money. Be careful with questions, since they will see that as an opportunity to control the conversation.

Use real instances when relevant. Do you have a similar customer you’ve helped out? Maybe you installed an irrigation system in the same neighborhood, or you’ve provided regular maintenance for a similar commercial property. Use examples to prove how you can help them and get to the point.

These folks are easy to get along with and are genuinely interested in what you’re telling them. They’re typically confident in how they carry themselves, but won’t be brash like a dominant personality. They are often enthusiastic and optimistic.

Unlike the dominant personality, an influencer will want to talk things through. They’ll most likely be asking questions throughout your sales pitch. It is important to build trust with these people. Even though the conversation might seem light, they tend to get distracted, so keep them on track.

They like creative solutions to problems. If you’re company uses water conserving methods in your irrigation work, show how they can save money over traditional methods and help the environment. Give them time to work through any questions that arise and lead the conversation.

Steady personalities are dependable people and are very friendly and sympathetic with people they like. They’ll be patient when they’re speaking with someone new. Most importantly, they appreciate stability, which is why it might be difficult to sell to them

Put in the time. While it might be a longer sales cycle than you’re hoping for, these folks can be great customers because of the same reasons that they are tougher to work with. Once you sell them, they stick with you as long as you treat them right. They might seem resistant to change and if they have other people they feel need to be involved in the decision making process(think husband and wife) they’ll likely want their input before making a decision.

Be patient, put in the time, build trust.

They thrive in a detailed environments where they can analyze and use systems to make decisions. They’ll likely ask questions about the numbers and won’t be very responsive when you provide emotional examples. Typically, they aren’t going to show what they’re thinking through their body language or facial expressions.

Give them the facts and numbers. You likely won’t be able to sway their decisions using emotional examples. So telling them that your lawn maintenance services are going to give them time back in their busy schedule so they can spend it with family won’t help their decision making process. If onsite, use brochures or handouts with pricing on the different services you offer so they can use that information to decide.

Above all, build trust

The DiSC personality assessment model is a great general guide. And if you’re out on an estimate or pitching your services to someone, it will be tough to decipher their personality type just from that one interaction. You can get an idea of someone’s personality type within your first few minutes of interaction, but it is impossible to know exactly how a person will react to different situations.

No matter what kind of personality type the prospect is, trust trumps all. Build a trusting relationship with the person and you can’t go wrong. A trusting relationship to a dominant personality might mean that you can cut through the bullcrap and get to the point, but to an influencer they appreciate discussion and being able to give input. Be patient when it seems like someone needs more time to make a decision. A No might turn into a Yes over time, so keep developing that relationship.

If you have any examples of when you’ve either sold or gotten shut down by one of these personalities, we’d love to hear about it, comment below!

Want to learn how to appeal to ANY personality online? Download your free copy of Local SEO for Green Industry Businesses!